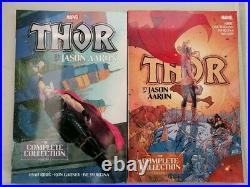 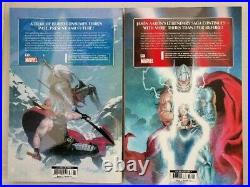 Thor by Jason Aaron: The Complete Collection Vol. 1 & 2 TPB Set. A trail of blood consumes Thor's past, present and future! Throughout the ages, gods are vanishing - and Thor must unravel the gruesome mystery of Gorr the God Butcher! In the distant past, Thor discovers a cave that echoes with the cries of tortured gods.

In the present, Thor follows the bloody wake of murdered gods across the depths of space. And millennia from now, the last god-king of Asgard makes his final stand. All three time-bending Thors must unite -but will it all be for naught if the massive Godbomb is triggered?

Elsewhere, Malekith the Accursed makes his return! As the former lord of the dark elves begins a bloody rampage, Thor must fi nd a new league of allies to aid him!

And back on Midgard, what's going on with Dr. THOR: GOD OF THUNDER 1-18. Jason Aaron's legendary saga continues -with more Thors than ever before! In the last days of Midgard, the Thunder God fights to save his adopted home from Roxxon -and its monstrous new boss!

But when the Son of Odin is rendered unworthy to lift Mjolnir, a new hero rises -Thor, Goddess of Thunder! Who is the mystery woman who now commands the thunder and lightning? Wouldn't Malekith, Odin and the Odinson himself love to know!

Plus, Old King Thor battles Galactus at the end of time! Young Thor tries to prove himself worthy! The accursed origin of Malekith! The beginnings of the War of the Realms!