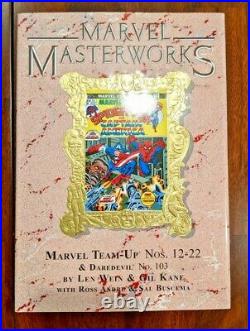 Collects Marvel Team-Up (1972) #12-22 & Daredevil (1964) #103. Spider-Man has never had the best luck with friends and when you're teamed-up with buddies like Ghost Rider and Jack Russell, the Werewolf by Night-well, who needs enemies?

Yes, that's right, it's time for another webslinging Marvel Team-Up Masterworks! Spidey is joined by an unmatched who's who of the Marvel U. From Captain America, the Sub-Mariner, Mr. Fantastic and Captain Marvel to Ka-Zar, Black Panther, Dr. Strange and Hawkeye, it's a feast of super heroic proportions for every action/adventure addict.

And just for good measure, Human Torch and the Hulk pair up against Blastaar the Living Bomb Burst! This item is in the category "Collectibles\Comic Books & Memorabilia\Comics\Comics & Graphic Novels". The seller is "zhenkel" and is located in this country: US.