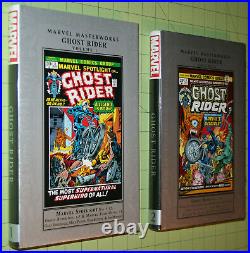 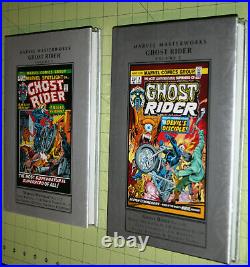 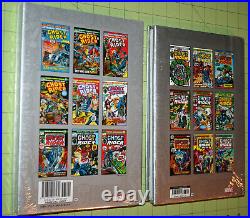 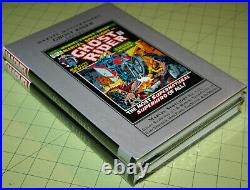 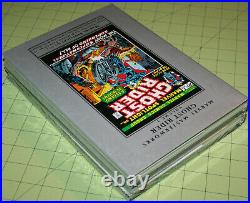 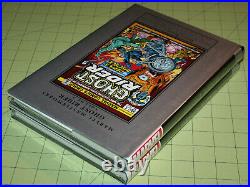 Collects Marvel Spotlight (1971) #5-12, Ghost Rider (1973) #1-5, Marvel Team-Up (1972) 15. Johnny Blaze, the Ghost Rider, makes his Marvel Masterworks debut! In 1972, one of the most iconic characters in comics history - the flame-skulled Ghost Rider - burned his demonic presence into readers' minds! A legion of fans found themselves addicted to the Rider's combination of hell-on-wheels drama and action-horror adventure. And it all begins here, when Johnny Blaze makes a deal with the devil to save his friend's life.

Transformation into the Ghost Rider! The stories that follow take the horror hero to Hell to battle Satan, pit him against the tempting Witch-Woman and team him with Daimon Hellstrom, Son of Satan. Written by Gary Friedrich and gloriously illustrated by Mike Ploog, Tom Sutton and Jim Mooney, this iconic series is beautifully restored for this Marvel Masterworks edition! Marvel's hell-bound super hero, Ghost Rider, hits the road for a second Marvel Masterworks!

Johnny Blaze's adventures begin with the return of Zodiac, an organized crime gang powered by agents of hell, in a plot that can only be foiled with the help of the super-heroic Stunt-Master! Then, after fighting for his very soul against Satan himself, Ghost Rider fi nds himself teamed up with the Ever-Lovin' Thing, in mortal combat against the ever-angry Hulk and in league with the ever-courageous Champions! Plus: with Karen Page having joined Ghost Rider's cast, Daredevil makes the scene in a crossover classic drawn by John Byrne! COLLECTING: GHOST RIDER (1973) 6-20; MARVEL TWO-IN-ONE (1974) 8; DAREDEVIL (1964) 138.

NONE OF THE ITEMS OR PACKAGING THAT I SELL IS IN MINT CONDITION! ALL PACKAGING MAY SHOW AT LEAST SOME SHELF/STORAGE WEAR. REGARDLESS IF ITEM IS NEW OR USED!

LOOSE ITEMS MAY HAVE SOME SCUFFS ETC! SEE PICS AND PLEASE ASK ANY QUESTIONS BEFORE AUCTIONS CLOSE! OFFICIAL NOT CHEAP KNOCK OFF! The item "MARVEL MASTERWORKS GHOST RIDER VOL 1 2 LOT NEW SEALED HC COMIC BOOK SPOTLIGHT 5" is in sale since Sunday, October 3, 2021. This item is in the category "Collectibles\Comic Books & Memorabilia\Comics\Comics & Graphic Novels". The seller is "heybuyme" and is located in Milford, Delaware.