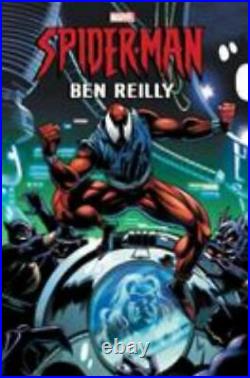 Up for sale today we have a Spider-Man Ben Reilly Omnibus Volume 1 by Marvel Comics. As the title states, the book is damaged in one way or another.

The plastic wrap is intact. The damage is as follows. The dust cover is slightly bent at the top. The outside corners are dented. The dust cover and cover have creases, scuffs, scratches, and may have small tears and wear from storage.

Please see pictures for best idea of condition. There's a new wall-crawler in town! Meet Ben Reilly, the Scarlet Spider, who recently learned he's not a clone of Peter Parker after all -- he's the original! There's no shortage of foes to fight -- including the new Doctor Octopus, Venom, Mysterio, Tombstone, Sandman, Kaine, Carnage and more!

We now have lots of DC Archives, Marvel Masterworks, and other hardback books at discounted prices. Powered by SixBit's eCommerce Solution.

This item is in the category "Collectibles\Comic Books & Memorabilia\Comics\Comics & Graphic Novels". The seller is "dheader" and is located in this country: US. This item can be shipped to United States.