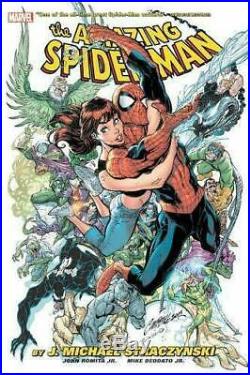 1 Marvel Omnibus by Straczynski [Hardcover] New! Michael Straczynski begins a run that established him as one of the all-time Spidey greats - joined by the legendary John Romita Jr. And they kick things off by introducing an enigmatic stranger with a startling secret about Spider-Man's origin! Wrestling with his separation from Mary Jane, Peter goes back to his roots with a new job - science teacher at his old school! But how will Aunt May react when she learns that Peter is really Spider-Man?

Plus: Spidey battles Doctor Octopus, Morlun, Dormammu and more, and teams up with Doctor Strange, Captain America and - Loki? And as Spidey copes with the horror of 9/11 and relives his heroic career, shocking sins of the past catch up with the wall-crawler! COLLECTING: AMAZING SPIDER-MAN (1999) 30-58, 500-514, 509 DIRECTOR'S CUT. Canada: 1 to 2 weeks.

Please note that digital codes if supplied with the product, are only valid in the country in which the movies are originally distributed from. Slipcovers are not included on items unless advertised in the product title.

This item is in the category "Collectibles\Comics\Graphic Novels, TPBs". The seller is "entertain_me" and is located in Bathurst, New Brunswick. This item can be shipped worldwide.